I have eagerly awaited this race for a long time and not just because it is practically in my back yard, but because it is the kick off to the beginning of my long races for the year, with mostly Half Marathons and Marathons scheduled. This would, of course, be the gauge that I would use to test my mettle, to see whether my legs can handle the pressure that I am heaping upon them. Boy did this race kick my ass.

As race day anticipation built the night before the sleep that I so yearned for was dragged before me tantalizingly close, pulled away at the last minute. Eventually I tumbled into a restless sleep for 3 and a half hours before my alarm went off, of which I hit snooze twice and made matters worse. Rolling out of bed I showered up, applied body glide, pinned the bib on and headed off for Los Gatos High School where the start and finish was. When I arrived there were already a ton of people milling around. Having picked up my bib the day before all I had to do was make sure I stopped off at the restroom before heading to the start line. But, wait, only four port-o-potties for 1,500 runners and spectators? The line snaked around and coiled within itself in a weird S pattern and I began to doubt whether I could use the restroom and make it to the start in time. Five minutes in I was casually looking around when I saw a woman bend down and strap on her timing chip. Uh, that hurts. I left mine on the desk at home. Panic set in as I immediately left the line and started jogging towards my car and I immediately realized that there was no way I would be able to make it to my house and back in time, and prayed to the gods of all things running that this event has a system set up to help numbnuts like me. Luckily, they did, and one disaster was averted. Now the restroom disaster. There was absolutely no way I could make it through that line in time. To my amazement as I was strapping on my chip I looked up and there was an unused bathroom that nobody knew about and was able to walk right in without a line! Amazing how things work out.

The gun went off and I was ready and rearing to go. I was sporting a new handheld water bottle to test out for the upcoming Marathon in SF, so it took a little getting used to as I started out of the parking lot. And, true to Firstwave Events, the race started with a hill (see Santa Cruz) at the very beginning, less than 2 tenths of a mile into the race. I suppose this was better than having a hill at the very end of the race, right? Anyway, we crested the hill and cruised downhill slightly, reaching the first mile at 7:23, which didn't surprise me. Race day anticipation always makes me run a faster first mile than I should, so I clamped down on my pace and tried to slow it down. Shortly there after the 10k runners peeled off and headed on in to Vasona Park and the Half Marathoners continued on the road up yet another hill. 2 hills, albeit not monster hills, within the first 2 miles? Hope this trend doesn't continue.

Soon enough the concrete was pounding my legs as we were on, yet again, a slightly sloping road heading north. More on pace in a minute. Eventually we turned east and entered Los Gatos Creek Park where we joined up with the bike path that I have biked a ton, so I was very familiar with what I would be running. Nothing too difficult, yet it would continue to have an ever so slight ascent the rest of the way. Here is where things began to worry me. My pace was way too fast and my body was screaming at me to slow down. I didn't know what had happened. Every mile that passed I checked my speed and made a conscious effort to slow down. And every mile was still faster than I should be running (7:23, 7:14, 7:43, 7:30, 7:57 and 8:16). I was running my 10k pace for a Half Marathon! In fact, when I was a little over 6 miles into the race I had just barely beat the best 10k I had ever run as a 10k race! Now I knew why my legs were screaming, my shoulders were creaking and my mouth was sucking cotton. I had to slow down. So I instituted a 30 second walk rule.

Now I might add the problem with my Garmin Forerunner 205. I used it during a softball game to see how much running I actually did (2.86 I might add), and also had it set to Auto Pause every time I was standing still. It took me forever to figure out why my watch kept beeping as I was running today, and I found out that this was because I had forgotten to take it off of Auto Pause. Any why o why was it beeping and auto pausing when I was running at 9 mph? A flaw in the technology, my dear Watson, one that I have found to be greatly annoying. This didn't affect my mile time splits in the beginning, but it would definitely affect things later on in the race.

Anyway, move back to the 10k walk rule and I am walking 30 seconds every mile. This worked well, I think, and got my pace under control. I kept checking my watch and knew that I was on track to set a PR so I started taking a few more walk breaks. Here is where it began to get hairy. I would hit mile 9 and my watch said I should be at mile 8.88. No biggie, the Garmin has been known to be off by as much as a tenth to two tenths. I continued my walk run breaks, more so now because of how tired my legs were. Mile 10 rolled around and now my watch read 9.84. Mile 11 and the watch read 10.74. What is going on? The watch seemed to be getting more and more off the mark. I had ignored it so far because I knew I was still on pace to easily be able to set a PR. Easily? Did I just say that? Something must be wrong... Damn, stinkin' technology. I relied on it and it was going to mess with me? I looked at the time and realized that I would now be cutting it close. You see, every time the watch paused it paused everything, even though I was still running. Cumulative over 11 miles and it added up and fooled me, gave me a false sense of security.

Adrenaline kicked in as I came to the turnaround just below the Lexington Reservoir dam. Legs be damned, shoulder pain ignored and cotton continually spit out, I began running for that PR. I knew I wanted it, and I had trained hard to achieve it and wasn't going to let a technological trust issue get in my way. Soon enough I was passing people before I turned onto the High School track and ran the last two tenths of a mile to the finish line. I looked down at my watch and checked the time. Surely I beat it, right? I was blown away. I had beaten it by seven minutes! Unbelievable. 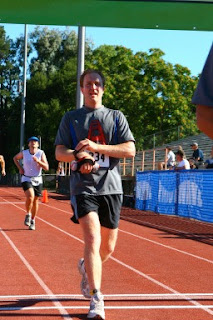 With the way my body was feeling it didn't seem like I was doing anything right. I started out too fast and blew a lot of precious energy. I had started to walk at mile 6 when I had intended to run the whole distance without stopping, which I was able to do a few weeks before. And I put all my trust into a piece of technology (and normally this would be fine, except for the auto pause thing, which stopped the stopwatch portion of the watch, which is ultimately all you need) and found that it decided to begin toying with my head. I even began doubting myself for the upcoming Marathon, not sure whether I would be able to finish it or not. But, when all is said and done, when it came down to my running shoes and myself, the training paid off. I was able to finish with an 8:28 pace, better than I thought I would run.

And the lesson? If I want to run the best possible Marathon I need to get my pace under control in the beginning, and not at mile 6. Trust your training and everything will work out for the best. With a tough Half Marathon under my belt, doubts and pacing problems be damned, I am feeling more confident about the SF Marathon coming up at the end of the month.
Posted by Brian Hawkinson at 4:26 PM

Congratulations on finishing! Not that the events were funny during your race, but I did laugh along with your recount of your adventure. I have done things like leave my Gu at home - forget my MP3 player, forget my number and lack sleep, proper nutrition or drink a bit too much beer. In the end, it builds character, eh? And what's up with the hill - hills at the beginning are just cruel.