I had high expectations coming into this one as it would be the last marathon of the year for me and would be the one that I would be able to test what I have learned and see how this affects my running. On a simplistic level it met those expectations, but on a deeper level it left me with more questions on how I can prepare myself for the future.
Silicon Valley Marathon - 4:35:47 (10:32 pace; 399/762)
I started out the night before with my traditional dinner before an endurance event: pasta in a homemade marinara sauce. I loaded up nicely in order to carb load myself ( I made sure I ate my protein for lunch). I love doing this dinner because it is easily digestible and easy on the stomach, which gives a quiet reassurance that my stomach won't become upset in the middle of the race and I would have to use a nasty port-o-pottie that smells and would, ultimately, take a few minutes off of my race. Was able to get some decent sleep after this because of the daylight savings and woke up early enough to have a nice, full breakfast. For this, again, I stuck to my traditional pre-race breakfast: two bananas, two slices of wheat bread with peanut butter and a Gatorade.
And away I went to the ever accessible downtown San Jose. Parking was a cinch, even as race time approached I was able to find free parking very easily. I met up with a friend and we marched to the starting line just in time to use the bathroom before the race started.
I was amazed out how low key this large city (10th largest in the US) marathon is. You arrive to the "expo" and are funneled to printouts on the wall where you find your number, then turn directly around and tell the volunteers your number, who then hand you your bib and timing chip. Curious, you turn to the right and enter a very small room to get your shirt and where a smattering of tables of people hocking their services and, well, that was it. The expo was done in a few quick glances. The same can be said of the race itself. There aren't any funnels and everyone is just kind of packed in and milling around. No structure at all. It doesn't seem like a lot of people standing there, but results show that there was just about 2,000 runners in the 5k, half marathon and the marathon, of which there were 762. So, as I said, a very low key and small race. Surprising for an event that has been on for as long as it has, this being its 10th anniversary.
As we started we ran south and away from downtown on main streets. For as little people as it seemed at the starting line it sure felt like we were all crowded together as we all marched along. I was running with my friend Jill and was going to keep myself pacing with her since her half marathon pace was about what I wanted to run for the marathon, which was a 9:50-10 minute pace. This was one of the main things that I was doing differently this race, which was to take a moderate pace and keep it steady. This was working much better than I thought it would. Soon enough we were running through the beautiful residential district of Willow Glen with its old, over sized Victorian houses checkered amongst newly remodeled and high priced homes. The weather was perfect and in the low 50's. I couldn't ask for a better situation.
Luckily the crowds thinned out as we turned on the Los Gatos Creek Trail at about mile 4 and began our trek northward. This was the tricky part that other past runners have talked about. They complained that since it is run on a bike path not closed to the public it was too crowded because not only were there many runners but you also had to deal with other bikers, runners and walkers enjoying the trail. I certainly did not find this the case as we rarely were congested and the few people out enjoying their morning were few and far between (although I was boxed in at about mile 7 by other runners, so the moron that I am I was watching the ground and decided to take a step out to the left and speed up to get around them when I hear a shriek from in front of me as biker was bowling speedily down the left lane. I barely dodged out of the way as I too let loose my somewhat deeper shriek).
I've ran this bike path many times so it was very familiar as we moved through Campbell at around miles 6-10 and then into Los Gatos at about miles 10-13.1 before hitting the lollipop portion of this out and back course. At the half way point I had ran an extremely conservative and easily manageable pace of 10 minutes and my miles were consistently within 5-10 seconds of this goal. This put me at the half way point at 2:09, right where I wanted to be because now I wanted to speed up a little and try and run a negative split. I felt this was also manageable because the course was gently sloping up to the half way point before turning around and gently sloping back down.

Not so dramatic as it seems because each increment is only 25 ft.
As I said, gently sloping and barely noticeable.

It was at about mile 15 that I noticed the one spot I would have never imagined I would need body glide was chafing and felt raw. Behind my armpit below my shoulder a ways. I mean I can't even really understand what caused it. Perhaps my water belt was pressing the shirt down and forcing the shirt to rub there? Who knows, but it didn't bother me that much as I sped up and was able to build a little over a two minute cushion off the 10 minute pace by the time I reached mile 18. Each mile was so steady to this point I am not sure what went wrong.

My calves started hurting again, similar to what happened at the SF marathon. The difference was that this time I was taking electrolyte pills (4 to this point), had eaten two Cliff Bars, ate 4 Cliff Shot Bloks and had consumed around 45 oz. of water. So I had things in balance enough to prevent cramping, but was it enough to stop my calves from cramping? More on this later.

My miles slowly dipped into the 11 minute range and by mile 20 the cushion I had built in had vanished. Then I ran a 12 minute and change mile, and then a 14 minute and change mile. At this point my calves were tight. They didn't hurt enough to prevent me from running, but it was uncomfortable. I took time during the 14 minute mile to drink a lot of water and to eat the remaining 6 Cliff Shot Bloks that I had left. How is it possible for something to taste so good? Their texture is like jelly bears and are gummy and dissolve in your mouth. Had raspberry, mango or something like it, and Margarita mix with extra salt. This was heaven and a great relief to my senses to enjoy these while I slowed down.

I sped up a little and was able to get back into the 12 minute range and knew that a PR was slowly slipping away. Mile 24 rolled around and I looked at my watch and calculated that I could still make it so I picked up my speed and away I went. And I don't mean running a 12 minute mile. I mean I was running a little faster than a 9 minute pace with ease. The calf discomfort was gone and running felt easier there at mile 24 than it did at any other point in the day. I was racking my brain on what I did differently that made the difference when I remembered my slices of heaven, 6 to be exact, that I had had 2 miles before and 24 minutes earlier. Especially the Margarita ones with the extra salt. Maybe it was my imagination but something in those must have kicked in as I digested them and gave me what I had been lacking during the race. 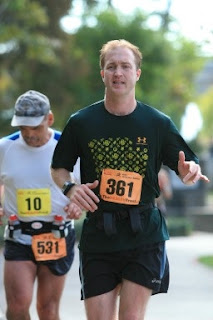 Everyone that had passed me miles before were now being passed with ease as I cruised on. I took one more walk break to catch my breath before kicking it into high gear and finishing strong towards the finish. Clocked in at 4:35:47 - a PR by 3 minutes and 1 second. 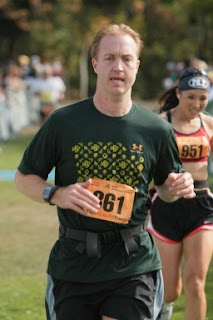 I learned a lot during this race. That I paced myself, ultimately, didn't really help too much as I ran about the exact same time as the SF marathon when my calves cramped and seized on me. My calves gave me a problem this time but I had taken enough precautions to prevent them from fully cramping. With this in mind I think the electrolyte pills I was taking are either not enough or I am not taking enough of them, and I should take salt tablets instead, which seemed to work better when I had the Cliff Shot Bloks. Ultimately, pacing felt much easier and manageable and if I can figure out the calf problem I will be in a good position to PR at my next marathon in Napa next March.

Ultimately, the race was a success and I am happy that I ran it. As a side not, despite the low key and not too well organized event at the start, finish and expo, there were plenty of aid stations and the volunteers were great in making sure there was plenty of water and cheering you along. Additionally, the shirt is a great tech shirt and the medal is a first class medal, perhaps the best one I have received yet.

Posted by Brian Hawkinson at 9:13 PM

Way to go! I am proud of you. You really do inspire me to want to run with you someday. Your writing makes me feel like I am already there. Keep it up.

Congratulations on your PR. That is awesome!

Just imagine what your time will be once you figure out what causes your calves to cramp up!

Awesome job, you look great!! I just realized that my google reader must not be picking up your new posts. I came by to see if you fell of the face of the planet, but no, you are there and posting away. Sorry I have missed you. Looks like you had a great run!!