I had high expectations coming into this event, the second Marathon I have ever run and the 1 year anniversary since my first Marathon. In one respect I did quite well and met many of those expectations, but on the flip side I am very disappointed with the outcome.

The night before I had everything planned out and ready. I knew what I needed to do nutrition wise in order to let my training take over and run the race that I wanted to run. The first hurdle was the big massive hurdle that I can never seem to jump over before a race: sleep. I went to bed at around 10:30 but wasn't able to fall asleep until around 12. No biggie, right? Well I had to wake up at 2:45 in order to get ready and be there in time to find parking. So the day started out bad, but I didn't take this as a bad omen. In fact, after a while I woke up and was feeling ecstatic.

I arrived and couldn't believe it! I found free parking! In San Francisco, on a day where 15,000 runners were converging? Yup, that's me. Of course it helps that I am paranoid and always show up early to find parking. So I made my way to the start line and, of course, had to make the obligatory tribute to the port-o-pottie gods. Not once, but twice! This was my first mistake: I went to the start line of my corral and proceeded to wait almost 40 minutes, which meant, of course, that the port-o-pottie gods had needed three payments. That could wait.

So I was in the front of the line when the race started. In fact, I had jumped two waves up, so I started early. When the gun went off I thought mayhem would be cast down upon us, as it was last year, but it didn't! In fact, I was all by myself in the front until we caught up to the wave before us. I was running an extremely easy 8-8:30 pace (extremely easy because of how I felt at the time). 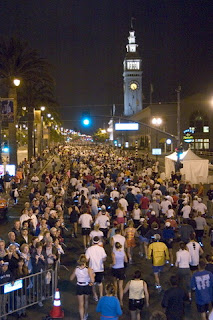 I was surprised as hell that people weren't passing me, and a quick cursory look showed they were behind, and getting further behind. I hit the almost five mile marker and took the second hill and was barely breaking a sweat. Everything was going so smoothly and it had been a long time since I had felt this strong on a run.

Eventually I moved onto the Golden Gate Bridge and here is where the cluster f**k started. The lane we were in can take about five people lined side by side, so no problem, right? Wrong, all the slow runners seemed to want to run with one another, so that caused other faster runners (me in this case) to have to slow down and/or weave in and out of everyone. This dropped my pace to almost 9:30 for about a mile and half before I was finally able to break away, or I caught up and passed the slower wave, who knows. Anyway, I hit the 7.5 mile mark at 1:03:57 and I was extremely happy. Right on my desired pace. 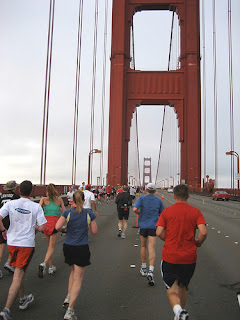 Turning around, we went back over the Golden Gate Bridge and then headed into Golden Gate Park. Here we came to the half way point and I was right on pace, having completed the first half in 1:51:20. Huh? That was 27 seconds slower than my fastest Half Marathon finish! I accounted for this, knowing that this was the pace I wanted because I thought I could then finish out the last half at about a 10 minute pace and reach the secret and ever hopeful time of 4 hours (the time I voiced out loud was 4:30). But here was where everything went wrong, at least I thought so.

It seemed the minute I stepped over the halfway point I stepped from Heaven straight into Hell.

My legs grew heavy and it seemed I was becoming sluggish. I pushed on for the next 2-3 miles and was still running the 9-10 minute pace. Then I was having trouble running. Ominous thoughts passed through my mind as I began doubting myself: "Maybe I'm not cut out for this distance?" "So much for becoming an endurance runner" "Perhaps my training wasn't near adequate enough". So I pushed on for another couple of miles, now running a sold 11 minute pace.

Notice I haven't mentioned the water stations? I didn't really notice them either until about mile 18-19. I started thinking about it and realized that I had only had around 5 ounces of fluid for the first 2 hours of running. Not near enough. I was grabbing a cup of fluid at every aid station except the first, of which there were 6 in the first half (of course, the cups they give you only have about an ounce in each). I should have been at around at least 50-60 at that point. But it was too late. My calves were cramping up on me and I could barely even do a shuffle up the street. I started drinking around 4 ounces of fluid at every stop. But it wouldn't really matter at this point because by the time it settled in and gave some relief to my angry calves the race would almost be done. But try I must and try I did.

Around mile 21 though things got worse. I couldn't even walk fast anymore and could only do the zombie walk up the street, thinking all the long while about going over to the sidewalk and curling up into a ball. Miles 22-23 were horrible, resulting in 21 minute miles. But, just as despair had overtaken my sense of pride and began building the grief that my calves were gladly dispersing, mile 24 rolled around and the fluids and sodium intake had kicked in! Hooray! I still couldn't run entirely fast, but I was able to get my miles up to a respectable 10-11 minute pace and, even better, I was able to finish somewhat strong, instead of the dreaded (in my head I was thinking of this, wondering what it would be like to hobble across the finish line, frightening the medical teams as they watched me stagger in) walk of horror.

At the pace I was running, before some angry monster decided to start stabbing my calves, I would have been able to achieve the desired goal of 4 hours. I was strong. The endurance and stamina were there. It was my poor execution of the most basic and fundamental law of running that did me in. Drink, drink drink! I calculated it out. I had drank only 22-25 ounces of fluid the entire race, when I needed at least 120-140 ounces. My hydration was so poor that I didn't go to the bathroom once during the race (except for the third obligatory tribute to the port-o-pottie gods at mile 4), and when I tried to go after I had to force a trickle out. It came out looking like watered down coke with a hint of yellow.

This was why this didn't meet my expectations. Because the training was there. I could have finished strong and possibly under 4 hours. But something that every single runner learns first was what did me in. No fluids. Lesson learned, one I will not ignore in the future. I am still pleased with my time, coming in close to my original expected time. So all was not lost.
Posted by Brian Hawkinson at 4:06 PM

Congrats on doing so well, and my sympathies for not meeting your personal goal for the race. Your story is great and encouraging for a new runner like me.

Oh Bri - That is heartbreaking and encouraging all in one. Something that is easily fixed, for sure, but I know you are disappointed. I know you will learn from it and doubt this will ever happen to you again. I will learn from it too, so thank you for sharing. Great job hanging in there while everything kicked in. I can't believe you went back to running. You are a trouper.

BTW, thanks for visiting and a big thanks for calling my turtle speeds impressive because they were fairly consistent. You might be the first to use that term. I might have to blog that! :) Thanks so much.