Okay, so now that I have ran the same Marathon twice, exactly a year apart from one another, and with an actual full year of training, how do they compare? What is the difference? Did I learn anything new?

Hydration - I'll start with the big one, the one that made all the difference in the world. In 2006 I knew nothing about hydration and nutrition. I started the race with a blank slate and figured I would grab a cup of water at every aid station, which I did. So I didn't drink more than I did in the 2007 Marathon. What was the difference then? In 2007 I ran a much faster pace and depleted the water much faster, which of course resulted in my meltdown starting at about mile 17. So hydration sucked for both, but I had a different result in both races. Additionally, I was relying too heavily on the sports drink they provided. From the research I did this time I knew that the concentration had to be measured accurately in order to let your body absorb the sodium, otherwise it is diluted and doesn't get into your muscles fast enough. Well, I noticed that some of the aid stations had very watered down energy drink (since it was made from a powder). Couple this with lack of water and my calves were seriously depleted of sodium. A very bad combination. Lesson? Bring your own water bottles, and the longer runs bring a Camlebak.

Pace - In 2007 my pace was amazing the first half. I felt like I was running the best race I had ever run. I was keeping an even pace, clocking in at 1:51. With the onset of hydration issues my pace dropped and varied depending on how bad my calves were, gradually getting worse until mile 24, in which case I sped it up to a 10 minute pace. In 2006 I went into it with zero training and was all over the board for each mile. So I learned and executed the pace lesson and was able to apply it to this year.

Chafing - In 2006, without ever running long distances, I had no clue I would encounter chafing. My inner thighs and groin were so chafed I had to walk bowl legged, hobbling around lest the chafing become aggravated. Additionally, my nipples were rubbed raw! So in 2007 I was able to prepare for this, applying Body Glide to all possible chafing areas. Result? No chafing anywhere. 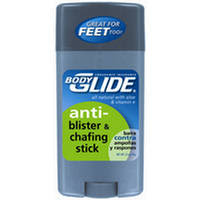 Feet - In 2006 I had purchased brand new shoes two days before running the Marathon. Obviously, I had blisters, although they didn't bother me too much. In 2007 my shoes were fairly new but had at least 75 miles on them, so I only had one blister. Even that was a blister on the exact same toe, in the exact same area that I always get blisters. So with used shoes as well as skin that is toughened up from a year of running, no blisters.

Weather - This plays a huge role on any run. It helped for the better this time. In 2006 we were in a heat wave, and although the morning fog was still there and the temperature was cool, it eventually melted away and left the heat to bare in upon us and make things a bit more difficult. This year, however, it was cold in the morning with fog misting us. This lasted the whole day, even at 11:30 when I left my windows were still being misted by the fog. So the weather definitely helped me run a much better race. But, alas, there really isn't anything I can do about Mother Nature. 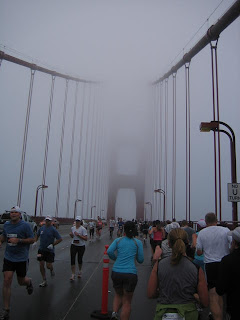 Start Line - In 2006 I jumped a few waves ahead and placed myself squarely in the middle of probably a 1,000 people. So when the gun went off it was mayhem as we were herded forward like cattle. There was barely room to move around in the beginning and if you happen to have someone run in front of you that is slower you had to weave and sprint forward and to the side and so on, which uses up more energy. In 2007 I placed myself right at the very front of the wave and waited it out. When the gun went off I had no one in front of me and I was free to run my pace without distraction. It is unbelievable the difference when starting at the front as opposed to the middle or back. Helps immensely.

Feeling - In 2006 I was ecstatic to be running my first Marathon. Granted, I didn't know anything, but I was happy to be there. It felt at the time that my lack of training dropped me straight into hell once I got past mile 5. In fact I was so exhausted and my legs were starting to hurt so much that I almost quit at the half way point. I eventually hobbled/shuffled over the finish line and wasn't sure if I ever wanted to do that again. Now move to 2007. I was even more excited to be there this time as I actually felt prepared and ready, eager to run. The first half I didn't feel winded and my legs didn't feel tired at all until dehydration kicked in and sapped my calves strength. When this happened it was perhaps the worst pain I had ever felt. Every step was a grunt exhaled. The pain level was 10 times worse than in 2006, even though I was in much better shape. Eventually I was able to get enough sodium and water into the system to resume running and was able to finish strong, which was different from the year previous.

Soreness - 2006 I was of course chafing, which hurt a couple of days. My knees were in pain for a week, and my legs were exhausted for the better part of the second week. One interesting muscle that surprised me that was extremely sore was my trapezius muscle, or the muscle between your neck and shoulder. 2007, though, I felt a little soreness in the meniscus of my right knee, but other than that I don't feel any lasting soreness as of right now, three days after. I briefly felt sore the day after the race in my trapezius, but that went away quick because I had been working that muscle out for a year now and it is conditioned.

Summation - As a friend pointed out, a Marathon is the whole package, so if I screwed up my hydration, well I can't blame that, because that was a huge part of the preparation that went into my training. So, hydrate yourself, apply body glide, train hard, wear shoes that are worn in, try to start near the front of your wave or the start line and focus on maintain a steady pace.

This was what I learned from this Versus.
Posted by Brian Hawkinson at 10:35 PM

Thanks for sharing this Brian. I dream of running a marathon some day, and reading people's experiences like yours is helpful.

Congratulations on your marathon and capturing all you learned. San Francisco is one of the events I would like to do sometime in my lifetime. Isn't it amazing how much we learn in just a year?

Nice Job. I can't remember what I do differently from one year to the next, but you've drawn some great lessons. What a great city to run a marathon in. Keep up the great posting and running--after you recover...

Sorry anonymous, but I should have had the settings set correctly. I like to see who is commenting.

As to your comment. I agree, I sould have trained with longer runs. I conceed that. That is something I will fix for the future. Did I start out to fast? Probably... But that wasn't the problem. I felt my body, I knew the energy was there, the endurance was there all the while my calves were cramping. If I had had the proper hydration, which was where I failed in my marathon training, then I know I would have hit the 4 hour mark. Plain and simple.

Again, sorry I deleted your comment. I would rather registered users comment and have changed my settings accordinly. Please comment again though as I did understand what you were saying and I know I need to train on longer runs. So I agree with you on some of what you said, but knowing my body I also disagree on some of the other.

And BTW, I will most certainly be running the 50k at a much slower pace. That I knew already and that I will do as you recommended. Have you ever ran an ultramarathon? If so I would love to hear some of your advice, or be directed to a blog you might have.