This was an amazing year for me. It was my first full year of running. Actually, discounting the little running I did in 2006 (where I ran in a marathon and a half marathon and trained maybe 50 miles the whole year) then I would say that this was my maiden year, the year where I started my journey to endurance.

The year started with a modest goal of running an average of 13.1 miles a week. Not running much in 2006, this was a good goal. It wasn't until March that I started signing up for races and set as my goal to run some half marathons, with maybe a marathon later in the year. I ended up blowing all of these goals out of the water. I ran the most miles for a month and a week in December, covering 114.49 miles for the month and 41.94 for the third week of December. I also clocked in at 15.52 miles on average per week, putting me at 807.19 miles for the year. Admittedly, I know I should be running a ton more miles than that if I want to get my endurance level up, but you have to start somewhere, right?

I felt confident in myself so I signed up for the SF marathon as well as the Silicon Valley marathon and began setting my sights on possibly running a 50k in December. After a demoralizing SF marathon experience at the end of July where I hobbled the last 10 miles on cramped calves, and still set a PR by 1hr9mins, I wasn't sure if I would run that distance again. A month had passed and I had ran a 5 mile, trail 10k and a half marathon and I suddenly forgot the pain of the SF marathon and set my sites on the Stevens Creek 50k at the beginning of September. I never looked back.

In 2007 I ran 2 marathons and 3 50ks in the last 5 months of the year, not to count the 6 half marathons and numerous other shorter distance races. In each and every marathon and 50k my time improved. 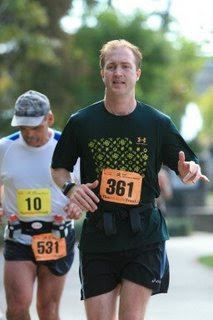 Coming into the finish of the SV marathon

I had similar success in the shorter distance races for the first half of the year but noticed a drastic change in how I ran once I started the longer distance running. I no longer focused on speed, which is the emphasis on 5k, 5 mile and 10k races, and possibly half marathons, and instead focused on the long haul, as many of my races towards the end were measured in number of hours rather than number of minutes. I still had plenty of highlights for the shorter races, such as my 3rd place finish in my age group at the Freedom Run 5k in Morgan Hill, or the impulsive entry into the Uvas Triathlon (3/4m swim/16m bike/5m run) which was one of the tougher races I did this year since I was not a good swimmer at all and only had a mountain bike, or the Muddy Buddy race I entered with my brother where we got to dive into a mud pit in order to cross the finish. 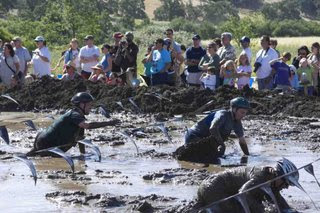 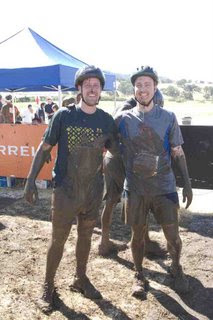 All in all, a great year, highlighted by the year ending 50k that I was able to run without a flaw. What's in store for me in 2008? I've got my eye on a ton of marathons and 50ks (if all goes according to plan then 8 50ks and 6 marathons) and 2-3 50 milers, as well as possibly a Half Ironman... Only time will tell (and a road bike for the Half Iron) and I look forward to what the new year brings.

Best of wishes and luck to all you runners in the blogging community!
Posted by Brian Hawkinson at 3:38 PM

Congratulations on an impressive year! Going from couch-to-ultramarathoner really shows your passion for the sport and is motivating to read!

You've been incredibly successful keep up the good work!

Well, I am a bit of an impulsive racer (impulsively signing up for the SF marathon in 06 three days before the event, a few weeks before the SC 50k and 2 days before the RB 50k) I luckily will never be able to sign up for Western States impusively since there is a huge lottery with a ton of people trying to get into that one. Whew, I think...

Although I am impulsive, I do work up progressively. I have my sites on some 50 milers this year (Quicksilver and Ruther Anderson) and maybe a 100k (if I am feeling good at Ruth Anderson then I will push that one to a 100k)...

With the marathon I figured I could jump in and do it without training (boy that was a mistake, although I still finished) but now that I have ran a ton I know that there is a lot more effort that needs to go in with each longer distance.

Best of luck with your half marathon training schedule... You know what they say, all the endurance you'll need for the marathon is no more than training for 13 miles... Beyond that it is training your body to be on your feet running for that long.

Congrats on a great year. I expect that you will make some great progress next year as you seem to have caught the running bug!
Happy New Year!