This was another benchmark on how my running had progressed thus far, the other being the SF Marathon. I had run this half marathon last year when I still hadn't been focusing too much on running, but rather running haphazardly. So, yet again, as with the SF Marathon, I am able to gauge how well I've come along. Beyond that this race would also be able to tell me how my knees are holding up.
Rock n' Roll Half Marathon - 1:53:39 (8:41 pace; 1,893/8,792) Stats
I had had a rather light dinner the night before at the dinner reception for the tennis tournament I also played this weekend because they served very small portions. This was a bad start, but I didn't want to load myself with too much food that could possibly not sit well the next day. Then, to compound matters, I only had a banana for breakfast.
This was one of the few races that I was able to go to with some friends, which was a treat. So myself, Jill and Carla were driven to the race by Carla's husband, Brian, which was a another treat. There aren't too many races I go to that I don't have to drive and park. So nice start to the day.
After the traditional bathroom break we all went to our corrals shortly before the race, which was another difference from last year, where I was in one of the last corrals and had to battle the masses, which used a lot of energy. This year I ran with runners running the same pace as myself so we were able to pace properly and not battle one another. 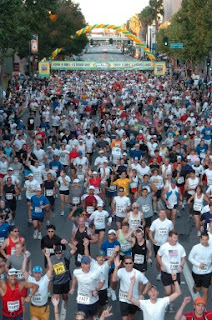 Soon enough the race started and I felt great. I was running a nice even pace that actually felt slow, when in fact I was running a 7:50 pace for the first 4 miles. I knew that this was probably faster than I should have been running, but I felt too comfortable running at that pace. It wasn't until shortly after the fourth mile when I stopped for a bathroom break and to get something to drink that it started not feeling so comfortable anymore. That short thirty second break was enough rest to let my lungs catch up to me, as well as doing something every runner knows not to do: try something during a race that you have never tried before.
Yup, I drank Accelerade, which wouldn't necessarily mean anything accept that it is a 4:1 carbohydrate to protein mixture, which means it is different than other sports drink. It is thicker and has a pasty, chalky taste. Flavor is not altogether bad but you can tell it is a much different drink. Anyway, so this was what they served for sports drink. After the bathroom break I drank a glass of it, and knew it wasn't sitting too well. Not enough to make me stop at the next port-o-pottie, mind you, but enough to clench my stomach and wonder when I would have to stop.
I was able to maintain my pace through the 10k checkpoint at 7:58. So all was still going well. I still felt strong but I could tell I couldn't keep up that pace. It wasn't until mile 8 that my hopes were dashed. I had passed up the 1:45 pacer in the first mile and felt that I should be able to keep him either behind me or in my sight, thus pushing me to a sub 1:50 time, which was my ultimate goal. But then I could sense a group of people coming up behind me after the mile 8 marker, and sure enough they were lead by the 1:45 pacer.
Mile 9 came around and I started taking walking breaks. This was when my hopes were dashed again, because I knew my goal time was slowly coming and would probably slip away.
At miles 10 and 11 I knew I couldn't come in when I wanted, so I focused on not blowing my energy for the tennis match that was later in the day. I was failing fast for some reason and I couldn't understand why. At mile 11 the dull ache in my left knee was poking its head out and trying to say hello, but I tried to ignore it.
Finally, the finish line came and I had to run down that last stretch and... I was happy to be done with this race. I couldn't quite figure out why I didn't feel strong at the latter half of this race. 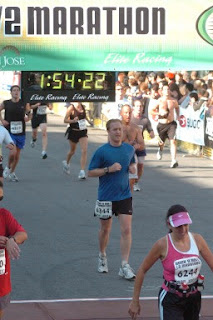 I finish strong, but when I get to the finish line I slow down a ton! I'm walking almost! Look at everyone around me... Their all sprinting! 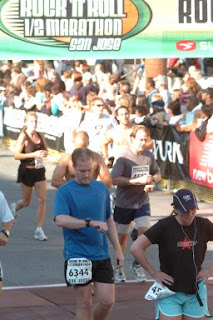 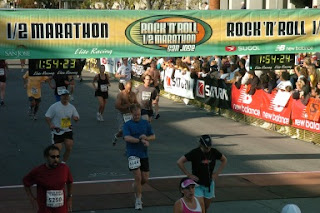 Several possible answers:
Whatever it could be it doesn't matter for this race. The result was what it was, but it could be useful in understanding what went wrong in order to prevent it in the future. Don't get me wrong, I am pleased with this result and am happy to have come in and finish another race. I would have liked to have kept up the pace in the first four miles that I had and finished in a sub 1:50 time (my previous last four half marathons have come in at 1:50, so I NEEDED to break this time). Another race down, more lessons learned.

As a postscript I felt fine after the race, almost like I hadn't worked hard enough. After a filling lunch to replenish the calories my sister and I played our next tennis match. I felt great out there. My legs and knees were fine as I sprinted, jumped and ran for the balls without even noticing that I had ran a half marathon. In fact I think it helped my serve as having ran the half marathon helped me keep my legs planted to the ground which helped it go in more.
As a second postscript my knees, which had been tender since the 50k, finally felt back to normal. No dull ache (until about mile 11 when it briefly flared) which gave me the go ahead to run more regularly during the week.
Posted by Brian Hawkinson at 5:25 PM

I know from reading the race report (and it was very interesting reading) that you are a little disappointed with your time. But I think all of the factors that you mentioned probably combined to slow you down. It is not necessarily one thing, but the combo that gets you. That said, I think your time was excellent. It doesn't really matter if it is a half or full marathon... on any given day they can be much harder than they usually would be.
Congrats on a great race.

I agree with Bill, with all of those factors in play and still coming only about 4 minutes behind your desired time is still a great accomplishment. On top of that you were still able to play a solid game of tennis. That's a good day in my book!