Decathlon Club and Run For The Future 10k

I have had yet again another eventful weekend, one that has left me drained a little more than normal. It all started with a tennis tournament in Santa Clara at the Decathlon Club. I played singles and doubles. My singles match was played on Saturday at 10 and lasted for about an hour and a half. I lost, which isn't anything new. Not sure why I keep playing singles. My serve, when it goes in, is almost too hard for most people in my division to return. That is the problem, it doesn't go in. In the first set I double faulted all four of my opponents points in one game (the two times I got my serve in that game I won the points), and another where I double faulted three times. Ridiculous and very frustrating. I've had problems with my serve since High School. Final score ended up being 6-1 7-6 (5).

Later in the day I played mixed doubles with my sister. We are a comical team because we play absolutely horrible for most of the first set before we find our tennis feet and decide that we would actually like to win. We've done this enough to know this is the norm, not the exception. Anyway, we came back from being down 5-1 to take the set at 7-5. But stupid mistakes abounded in the second set and we handed our opponents the set on a silver platter. The third was a little scare but we took it anyway. Final score 7-5 3-6 6-3 in 2 hours and 15 minutes. Finally, we played yet another match on Saturday at 5:30, with one of the players being the player that beat me in singles. I so wanted revenge, but it wasn't ours to take. But, yet again, we handed them the third set with errors galore from simple volleys and ground strokes. Final score 6-4 3-6 6-4 in 2 hours and 45 minutes. A busy, tired weekend. And I mention this because this all happened on Saturday. The next day, in less than 12 hours, I was to run a 10k. 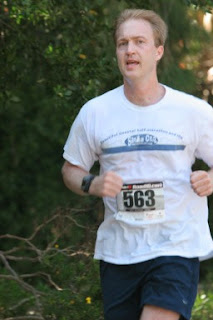 At the last minute earlier in the week I decided to sign up for this 10k. I knew I had the tennis tournament and I had two thoughts going into it. One, if I happened to make it to the finals of either/both draws I would have plenty of time after the run to get to the tournament for my match (I was a little unsure about my level of energy though, but thought two won over). My final thought was that it was very unlikely that I would make it to the finals. Pessimistic thoughts, but I have played in enough tournaments to know how far I can go and the semifinals is usually as far as I can make it. What I didn't count on was that I would be playing 6.5 hours of tennis in 90 degree weather with less than half a day to recover and for a chance at setting a new PR.

Anyway, I woke up and felt strong. A little groggy since I was working on five hours sleep, but at the time nothing too noticeable. The race took place in Palo Alto at the Baylands, a marsh area just off the bay. At 8:30 the race began and I started with a bang. I think it was being around all the other runners and the anticipation of running in another race that triggered my legs to want to run faster than I felt I should. The first mile clocked in at 6:52 and I was shocked. In every event I had ever been in I had always been mid to high 7 minute miles to start, whether from not having the speed or forcing myself to pace slower. Either way, I was starting much faster than I should have. I noticed right away that my legs were very tender and tired, with my heels and toes still sore from playing tennis the day before. Couple that with my fast start and I didn't think things were looking too good. So I soldier on and mile two comes by and it is a 7:12, not too far off mile one. I was in disbelief. At this point, though, fatigue from the day before started setting in and all my miles, except mile 6, progressively got slower. The course helped some as it was a loop that followed HWY 101 before turning towards the Baylands and follow along the mud flats. A very flat and fast course.

At 5.5 miles in I decided to make a run for it. There was a man in a yellow shirt that had passed me at about mile 2 and I had him in my sight, from a distance, for the whole race. I had to make my move, so I sped up. This was perhaps lesson one, that when you feel tired you really can press on and make yourself run faster. The strength is there, you just need to apply it. It seems rhetorical, but it really isn't. After you have raced x amount of miles your body begins to deceive itself and your mind wants to listen to it. So I overrode the pending system failure and took control. It felt great. My energy picked up and I caught the man with about .3 miles left and beat him to the finish line. By the end of the day, despite the fatigue from tennis, I was able to post a PR of two and a half minutes at 46:52. I can only imagine how I could have done if I had come in to the race with fresh legs. I also learned one final lesson. I should begin focusing on starting slower and gradually getting faster, hopefully posting negative splits. With this conservation of energy on cold muscles I will allow my legs after a mile or so to warm up and perform their best towards the latter end of the race when you need it the most.

All in all, a great event. Well organized with plenty of food and beverages at the finish line with friendly volunteers. I think I will definitely plan on doing this one again next year.
Posted by Brian Hawkinson at 11:57 PM