Having conquered the Marathon and the Half Marathon last year I began looking for a new endeavor, something that would challenge me just as much as the other two. Of course it was the Triathlon that sprang to mind, and the moron that I am I started out on an almost Olympic distance Triathlon (not quite Olympic, but too far away from Sprint to be considered as such), which was a 3/4 mile swim, 16 mile bike and a 5 mile run. So of course I trained quite a bit for the bike and the run portion. No problems there. But I have never swam long distance, and hadn't swam in almost 10 years! How about we compound the issue a bit more. Before the Triathlon I was only able to get two swim practices in on the Sunday and Monday before the event.

Race day arrived and I showed up way to early, eager to get there and be sure that I got a transition spot. I was the second person there and had a lot of time to kill. Anyway, here was the kicker. I only had a mountain bike. How much of a difference would it make? We'll see later. So I set up my transition and they eventually kicked everyone out and ushered them to the reservoir. As I was standing around I glanced up and down at the 650 or so participants. I was so out of place. Everyone had full body wetsuits and I was standing there in my tri shorts. A sea of black bodies with me the lone white ass skinned man standing out like a sore thumb (ha, well at least I wasn't alone - there were about 10 others without wetsuits). 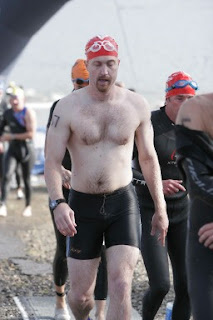 I had already felt the water and didn't think it was cold at all, but as I approached the water for my wave I see a woman fully submerged in the water with a full wetsuit shivering! Huh, what was going on here? Anyway, my wave got in the water and it wasn't cold, so that worry flew out the window. In fact the temp felt great, must have been around 70. Gun went off and everyone began swimming. 30 seconds into the swim and I was already so tired I couldn't swim anymore. This was going to be a long day. I should have trained more. I turned over on my back and resorted to this weird backward stroke that at least kept me afloat and moved me forward a little. Again, the moron that I am, and a friend pointed this out later, I wasn't taking my hands out of the water when I moved them for the next stroke. So I was moving three steps forward and two steps back. In fact I was moving so slow the lifeguards kept paddling over and asking if everything was alright or if I wanted to hold onto their surfboard and rest. Kind of comical. A little embarrassed, I pawned one lifeguard off to another swimmer who had moved to the shallow water to stand on firm ground rest. 39 minutes later (a 53 min per mile pace - yeah, that's right, I was moving along really fast!) I could finally get out of the water. It seemed like every single wave after me had passed me up, accept perhaps the Clydesdale and Athena groups. Waves that started 20 minutes after breezed past without even breaking a sweat. Oh well. I slipped on my flip flops and began walking up the boat ramp (Uvas was too low to have the transition area next to the water) and kept slipping out of them. Looking like a fool, I kept my head down and focused on not losing my flip flops again, which I still did another couple of times. 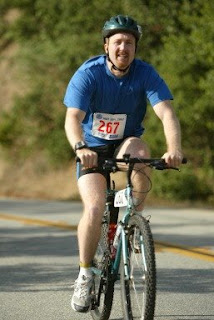 Get to the bike and I started to think that this was where I would make up time. I started moving along and felt strong. Then whoosh, whoosh, and whoosh as three bikers flew past me barely pedaling. I'm struggling to move as fast as I could and they were barely trying. You see, I had a mountain bike, which was considerably slower and used a lot more energy. Suffice it to say, it felt like every single biker that was behind me had passed me. Even up until the last half mile they were all still passing me. I could do nothing but shake my head. There were some very helpful triathletes out there, though, who took the time to give me some tips. One nice gentleman saw me pedaling hard and told me to change gears and pedal faster, which would ultimately save the legs for the run portion. I think this could have just perhaps been a life saver. 1hr8mins later I finally transitioned into the running leg. 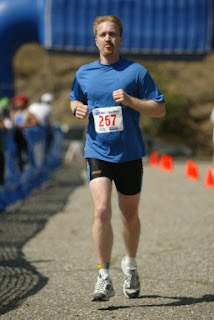 My legs felt wobbly but strong, so I moved out without waiting. A mile in my left leg tightened up and almost cramped. This has never happened before. Luckily I was able to finish strong, despite the leg, at about an 8:52 pace in 44 mins. The course itself followed the road around Uvas and was fairly flat, with only slight ups and downs with gentle ascents and descents. The heat, though, was starting to pick up, so that dampened things a little.

Overall, the whole Triathlon took 2hrs38mins. Yet another event I conquered in less than ideal circumstances. I can only learn from my mistakes again. All in all, a great event that was well organized. If you live in the Bay Area give this one a try. You won't regret it.
Posted by Brian Hawkinson at 2:11 AM