Now this was a fun weekend. I was able to get two events in: My first 10k and one my brother and I have been waiting for, Muddy Buddy.

The 10k was held in Henry Coe State Park in Gilroy, CA. A great park that made a nice little quaint morning run. My friend, Carla, and myself arrived early and walked the course some. They've said in the past that there are meandering creeks that run through the trail run, but this year there were only two that had any water in them, one you could jump over and the other had a trail going around it. Some die hards jumped straight into the creek to cross, but if you can cross and remain dry why would you ever soak your shoes and socks and risk blisters and sore feet? Who knows, but I was happy that the 7 or so creeks were all mostly dry.

The race itself was great. Around 200 or so people showed up for the 5k and the 10k, so it wasn't too crowded. Still, I moved to the front to avoid the walkers early on. With the gun going off I eagerly began. My pace in the beginning was a little fast and soon noticed it and so slowed down. With a nice even pace I was able to take in the course. And this I did as all the dust swirling in the air caked my nostrils and face. Soon enough we hit some small hills which kind of made this a trail run. I say this because this is definitely a trail run, but probably an easy one compared to others. Anyway, at the half way point I grabbed some water and drank half and threw the other half over my head. The rest was an easy run as most of the small rolling trail was now going at a slight decline. Soon enough I came in at 49mins16sec, a personal best by almost 3 minutes! My friend Carla, incidentally, who hadn't run a competitive race since October of last year, placed first in her division! This just tickled me happy. In fact, if you include the men she placed 3rd in her age overall! Way to go!

Now this is one I have looked forward to for awhile, one my brother had heard about and wanted to do with me. In case you have never heard of it, Muddy Buddy is a race where you team with a partner and one person bikes and the other runs, then after a mile or so you do an obstacle course and then switch, the other biking and the other running. This goes on for about 6 miles or so. We had heard that the first leg is up a steep hill so whoever was in better shape should ride the bike first. This was our original intention, but then they released a map that showed that whoever ran first would run quite a bit more and the rest was downhill, so since I was a better runner than I should start with the run (we were originally going to have me do the bike for the hill on leg 1). Suffice it to say, I wouldn't have brought it up if the hill wasn't so tough. Practically straight uphill for 6 tenths of a mile. Poor bikers. We started the run leg three minutes after the bikers started and we passed the first biker, who was walking his bike, at about a tenth of a mile in! That hill was a bitch. The rest of the race was a blast. Extremely dusty, especially with all the bikers flying past you as you run kicking all the dust in the air. Didn't have my sunglasses on, so you can only imagine.

Technically it was a duathlon, but something makes this one different. At the very end, you climb into a mud pit roughly a hundred feet long! You look at it and realize that you actually paid money for this, then you look forward and find that the only way to cross the finish line is to crawl in mud. You reach your hand in and you sink to your elbow. It's kind of comical. We looked like dogs or cats trying to walk in water with the legs in the water and your abdomen thrust way into the air to avoid the water. Then I hear the announcer yell out, "It's a mud pit, you're supposed to get in it!" Ha, he could only be talking about us. Eventually I said screw it and went as fast as possible, while my brother was trying to throw mud on me from behind. 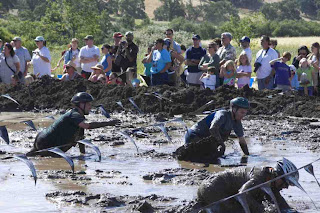 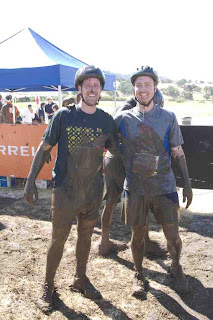 All in all, a very fun race. I wish there were more to the obstacle courses. Perhaps include a few obstacles in the mud pit. Other than that, we had a great time.
Posted by Brian Hawkinson at 11:47 PM