Because of the two races I did last year I knew that I wanted to begin entering a lot more events, if for nothing more than to get my butt out there to run and to have motivation to try and improve my running personal records. I got a late start, not beginning until April. 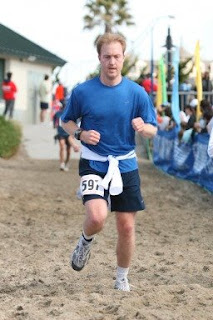 This was my first test of how well I was doing in my training. I had previously bought the Garmin Forerunner 205 and had been training with this a ton. If you don't have one, get one. Amazing, one of the best toys I have ever bought. Anyway, I had gotten myself to a respectable pace over a 6 mile run. Taking this to Santa Cruz I paced myself at about an 8:30 minute mile. For the first 8 miles it worked wonderfully, but this was where I began to slow down. The course itself was a great course that started next to the Beach Boardwalk. From the start line you move straight to a hill right from the get go before following the coastline and eventually did a loop on a dirt hiking trail. There were a few hills, not too large, that I wasn't aware of and this definitely made it a more difficult Half Marathon than the PF Changs Half, which was very flat.

That being said, I eventually crossed the finish line at 1hr58mins, 18 minutes faster than my previous best! Woohoo, my training was working. Must say, great course and great weather. The finish line was a little irksome as they have you finish on the beach, running through sand. A bit heavy after 13.1 miles. And the refreshments! No easy way to get either water or food, since they were on opposite sides of the beach separated by the finish line! Finally, results were sorted by gun time, not actual chip time. Other than that I loved this event. Would recommend to everyone.
Posted by Brian Hawkinson at 2:10 AM