Previous to this race I had only raced one other race: The San Francisco Marathon. I had no training for that one and was sore for a week, but it definitely put the bug in me to run a ton more. That was when I stumbled upon the inaugural Rock n' Roll Half Marathon. I signed up for it and then I was able to get a few more friends to join up with me. This was going to be a great race.

I had come into this in a much better condition than the Marathon that I had run previously. I was running regularly and had shed roughly 15 lbs, so things were looking up. The downside, in hindsight, was that my "long" runs were only around 4 miles or so. That would certainly not cut it. We all met up at Clint's house and headed out to fight traffic. The event was in downtown San Jose and there is huge shortage of parking. Finally, a mile or so away, we parked. What the hell, we needed a warm up anyway, right? I had to do the same dance I did at the Marathon as I waited for the port-o-pottie as the race was just about to begin. Comfort level back to normal, I lined up to start. 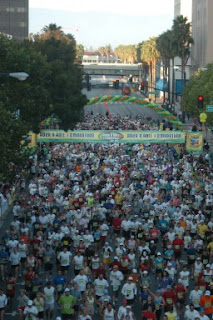 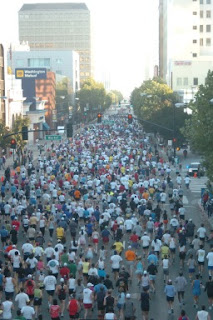 The start and the long stretch through downtown
When the gun went off Clint and I started out at a decent pace. We started in a wave pretty far back so we did a ton of weaving and swerving to get around and in front of thousands of people. This blew more energy than just straight running, and this was mistake number one. Eventually we were getting a little more space to run. Unfortunately, though, this was where Clint had to drop back. He came into this event as I did the SF Marathon: with no training. So I soldiered on.

This was mistake number two: I started out way too fast and didn't properly pace myself. This was a killer. At about mile 4 I had to start walking as we came upon a cheerleader squad and a water station. I grabbed some water and sauntered along, eventually deciding to pick up the pace again. Eventually I pass a few bands and enter the Rose Garden district with some beautiful houses. I didn't even know this area was back there! I find it amazing what you see when running, and this was no exception. Eventually we came back around towards downtown before turning past the HP Pavilion and heading west. At this point I was still doing alright. I was about 6 miles in and felt strong, despite the need to walk every once in a while. This was when I heard people cheering and so I looked down the road. The lead gazelle was coming down seemingly with a full on sprint! You see, where we turned past the HP Pavilion was right around where the finish line was, so the lead runner was about to finish 13.1 miles in just over an hour, having run the entire race at 13.1 MPH! Unbelievable how fast he was running. And I had more than half the race to go still.

So as we continued west I came upon a few more bands and cheerleader squads, which does some to distract you. Unfortunately you are past them so quick you barely get to hear them. So we cross under an overpass and turn into another residential district before looping back and making our return home. At this time my pace had slowed terribly. I was doing a ton of walking and people were passing me all over the place. I didn't care. I was getting that feeling again behind my knees and I was losing energy fast. Luckily I had applied Body Glide so there was no chafing this time. Now I just wanted to finish.

Eventually I ran back in front of the HP Pavilion before turning into the Caesar Chavez Park where the finish line waited. As I crossed over I could only think, "How in bloody hell did I ever run a marathon?" as my legs and knees screamed at me. I didn't answer, instead I went back, got my medal, a wet towel and drank about 6 bottles of water before going back to the finish line to await my friends. Soon after Carla came across, and then Clint after her. It was a fun event, very well organized and I was glad I was able to run it with some friends. I knew, though, that if I wanted to continue running these events that I would have to begin logging a lot more miles a week. 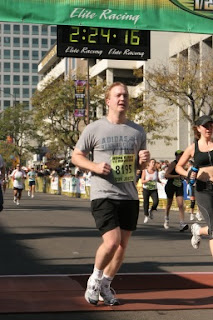 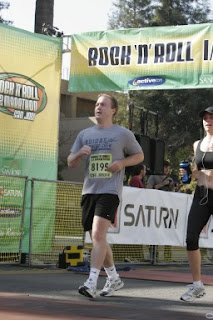 Posted by Brian Hawkinson at 12:06 AM