Now this is my second and last scheduled triathlon of the year, with hopefully more to come. The last one I had raced in Morgan Hill at Uvas Reservoir and was hampered by my swimming as well as the fact that I had a mountain bike, which took a lot more energy and was a lot slower. This race would be much more accurate as to my stamina in a triathlon compared to the other racers.

Whew, this was a fun race. I've been looking forward to this event for a long time, not only because it is a) a triathlon or b) it is a mountain bike triathlon but because c) I have two friends who signed up for this event as well: Brian and Carla. Race day rolls around and I am there pretty early, wanting again to be sure and claim a good transition spot. Brian and Carla are already there, so I play catch up and pick up my packet and get my body marked. We finish everything up and take a stroll down to the water to test the temperature. I couldn't tell at first, but this water is definitely cooler than the Uvas Triathlon, confirmed by the announcer who said the water was 58 degrees. Not sure it was that cold but... They had been filling up the lake with extremely cold water, which you notice at the end of your swim as you swim right past the incoming water. 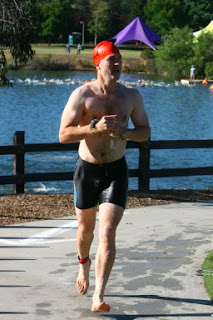 Time rolls around and the first wave goes off. My friend Brian and I are in the second wave, so we get in and get ready. I've began using the breaststroke recently which greatly increased my snail's pace that I had at Uvas, so I was fairly confident. Gun goes off and the mayhem began. 500 yards isn't so long, so I wasn't too worried about the length. Round the second and last buoy and I look up at the beach and Brian is already getting out! He lapped the wave in front of him and came into the transition area at 8:15! Unbelievable. So I am just about to finish and get out when I feel a rolling of water to my right and sure enough, the lead female swimmer from the wave that started 5 minutes after me passes on by, then I feel a wave to the left and the second female from the same wave passes as well. Damn it, I was trying to finish fast enough to not be lapped myself, but oh well, I kind of knew this would happen. Luckily it was only two swimmers, right? So after 12 minutes and 25 seconds I get into the transition area and about a minute into it my friend Carla comes in (who started five minutes after me), clocking in an impressive 9:26! Damn Carla and Brian are fast. 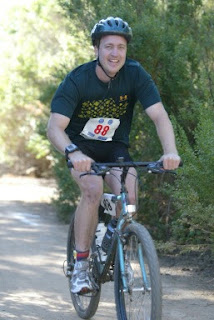 So I take off on the bike and immediately begin passing a ton of people. I passed the most, though, on the steep half mile hill. In fact, this is where I finally was able to catch up to Brian. Anyway, we cruise down that hill and get to the mountain bike part of the race, which is a single track trail following a creek with a few creek crossings. They didn't give us any warning on the first one and we hit it pretty hard. I got half way across the creek in too low a gear and had to walk my bike out. A little warning would have been good. The guy in front of me hit it so hard he almost flipped over the handlebars. Pretty soon though I am moving along and I am all by myself. I can't see anyone in front of me or behind me. The trail has some pretty steep turns that go straight up a hill, and I hit one of these without warning and crashed. Kind of funny. I was able to stop mostly but my momentum kept going forward and I was on the ground. I few cuts and bruises and I was up again. Only two people were able to pass, in fact these were the only two people I saw the whole single track section, which was about the last 6 miles or so. I came into the transition at 40:33. 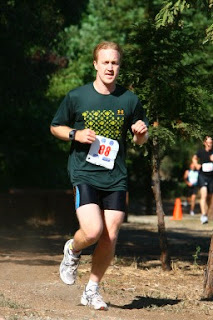 The run felt tough. My legs were heavy, but I was surprised to see my first mile clock in at 7:15. Must have been moving faster than I thought. Eventually I finish the 3.1 miles at a 7:15 pace in 22:29, the fastest I have ever ran that distance. Amazing that it happened after I was tired from the swim and bike portions. In fact I have found while training for this that a lot of times once my legs are already warmed up, tired and so on from the bike that I do run very good mile splits. Strange. Overall I came in at 1:19:27, which was good for 73 out of 203 participants. At this finish line it was the best food I had seen at any event. Plenty of water with fruit, bagels and burritos! Big chicken burritos. Loved it. Granted it was 9:50 in the morning, but that burrito tasted great. My friends put in strong finishes as well, so I was happy when they crossed the finish line and I could see the flush of a recently completed triathlon spread across their face. Triathlons: tough, but rewarding.
Posted by Brian Hawkinson at 5:47 PM